Ava started agility training this year, and she loves it. The agility ring is her giant playground and she’s fearless. She also competed in her first Barn Hunt trial earlier this year and attended ClickerExpo 2017 in Portland, OR. She has a knack for finding socks and has been known to leave them scattered about the house. One of her favorite games is to grab a hoof (or piece of broccoli) and toss it in the air before rolling vigorously on it. She also loves to play tag with me, where we chase each other back and forth as we both “growl” fiercely.

Rory has also been training in agility and competed in a couple AKC conformation shows this year. So far she’s earned one point and was BOS at the PDFC show in March. Her most beloved toy is an empty milk jug and she puts herself to bed by 10pm. Her big brother is a Belgian Tervuren and one of her favorite games is attempting to steal his toys; she also pretends that the floor is lava by leaping from couch to Tervuren to ottoman.

Chaser has been training in obedience and Nosework, as well as learning how to skateboard. He’s also attending conformation handling classes and entered a couple of shows with handler Danielle Green. He loves to steal breakfast bagels and play keep away with them, as well as “killing” his dog bed and “making it rain” by shredding dollar bills.

Tig is a neighborhood favorite and has a special connection with children and the elderly. He ferociously guards the backyard from squirrels and has been known to pull vents out of the floor to attempt tunneling through the ducting. The bitter Idaho winter was no problem for this adventurer and by 8pm you can find him in bed, dreaming of what tomorrow brings. 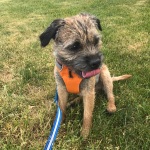 One thought on “Happy birthday to the Gaelic litter!”

Never assume that a dog approaching something or someone means that they are comfortable with it. Indeed, it can be quite the reverse and if the person responds, that is exactly what could cause the dog to panic. This recent article from Denise Fenzi really hit home for me because it describes Ava to a T. […]

The layered crap cake developmental phase (Nancy Tanner) Accidental behavior chains part 2: how do we fix them? (Dr. Jen’s Dog Blog) Worrying about the ‘almighty’ reinforcement (Cognitive Canine) What is desensitization and counterconditioning in dog training? (Companion Animal Psychology) Why a DOG PARK education is worse than no education at all (Nancy Tanner)